Success Dostta has been here before.

Five years ago, the little black gelding was showing off his speed and jumping prowess over hurdles at Werribee Racecourse. Today, he is doing a light dressage workout just down the road at Werribee Park National Equestrian Centre, in preparation for the 2018 Melbourne International Three Day Event.

Dostta is one of two OTT thoroughbreds belonging to eventer Phoebe McIntyre. Tasmanian born and raised, Phoebe spent several years riding trackwork for David and Julie Brunton and their son Scott. It was the Brunton family that gave her Dostta, along with his stablemate Lock It In Eddie.

Phoebe’s first equestrian connection was with a couple of standardbreds that her mother kept on the Bruny Island farm where she grew up. At around eleven years old, she acquired a tiny black shetland named Mischief on lease. Together, Phoebe and Mischief rode around the farm, explored the beaches, and became members of D’Entrecasteaux Pony Club. 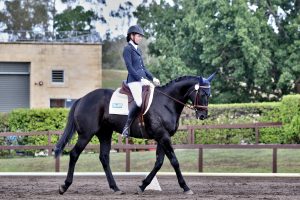 Phoebe graduated to bigger ponies, then horses, and then at the age of fifteen gave up riding altogether. School and a growing interest in musical theatre took priority for the next three years. When she applied for a Summer Camp USA job during her gap year, Phoebe assumed that it would be her singing and dancing experience that would win her a place. Fate stepped in, however, when her interviewer informed her that the children attending this upstate New York camp were already performing on the likes of Broadway. Phoebe switched gears to spruik her other skill – riding – and landed herself a job in the thirty-horse barn instead.

After two summers at camp in the Catskills, and an interim year in Scotland being nanny to four girls with six ponies, Phoebe returned to Australia with the tentative idea of seeking horse-related work back home. An advertisement in Yard and Groom led her to David Brunton, who assured her that a lack of race industry experience was no issue, and encouraged her to give it a go. Phoebe went on to work for the Bruntons for four of the next five years, while also completing a nursing degree.

It was through her trackwork that Phoebe met Dostta and Eddie. One weekend in 2013, she rang David asking if he might have a horse for her, and by Monday she had picked up Eddie. The big chestnut gelding had been particularly well-loved by Scott, and by his owners. The latter were a syndicate of young men who were not horsey as such, but were so thrilled with Eddie’s racing career that they would come out just to watch him at leisure, exercising on Seven Mile Beach.

Eddie took Phoebe back to her Pony Club origins. They became members of the Huntingfield club, where they began competing in eventing. On their first outing Eddie refused the first jump because it was muddy, and they were eliminated. Their second event together was the Southern Tasmanian Eventing Championships, and on this occasion they won the Grade 4. From then, it was up and up through the grades.

A year and a half after Eddie became Phoebe’s, Dostta followed. An “easy-going, nice-guy” type of horse, Dostta had been David’s special favourite. While Eddie had only ever galloped on the flat, Dostta had been a hurdler for part of his racing career, so was already somewhat familiar with the jumping aspects of eventing. Being less hot by nature than Eddie, Dostta also settled into a more consistent dressage phase, although Eddie has the athletic talent to produce a better test on a good day. Both horses excel over cross country, with the legendary thoroughbred scope, stamina and ground-covering stride.

Throughout their working association, Phoebe and the Bruntons found new equestrian homes for a considerable number of ex-racing thoroughbreds – almost twenty in total. Phoebe left the Brunton stable when she commenced full time nursing at Hobart Private Hospital early last year. She has, however, found the odd working hours of the profession to be a convenient fit with her increasing commitment to riding, training and competing her own horses. When a theatre nurse position came up at John Hunter Hospital in New South Wales, Phoebe took hold of the opportunity to head north and campaign Eddie and Dostta on the mainland circuit.

The horses are currently based at Hunter Valley Equestrian Centre, and training at Sandhills, home of top Australian eventers Prue and Craig Barrett. With such contrast between the mainland and the island state in terms of sheer number of events, Phoebe has had to develop a selective approach to her competition schedule. Dostta competed in the Sydney International Horse Trials in April, and will have a break following his One Star appearance at the Melbourne International Three Day Event this June long weekend. Eddie will have a pre-novice run at Denman Horse Trials One Day Event later in the month, before moving on to One Star competition. 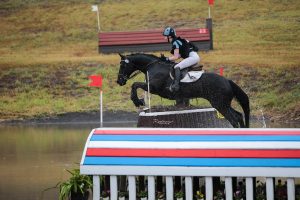 We wish Phoebe all the best in the upcoming MI3DE, and we are immensely proud to introduce her as our Off The Track sponsored rider!